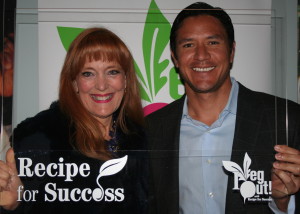 Nearly 100 gathered for breakfast at Canopy restaurant in Houston on Wednesday morning, February 25 to celebrate the launch of VegOut!Challenge 2015. Celebrity emcee, Brian Ching talked about his experience with Recipe for Success Foundation at Rodriguez Elementary School where he was impressed by the children’s enthusiasm for and knowledge of fresh produce. He shared that he was personally looking forward to the challenge as a way to expand his vegetable repertoire and that especially after retiring as Captain of the Houston Dynamo, he has to be particularly mindful of his diet. Ching introduced Gracie Cavnar, founder of Recipe for Success Foundation, who talked about the origins of their VegOut! Challenge.

“We decided to use the very same tactics on everyone else that we use on children,” she said. “Making healthy food fun . . .an adventure. Taking the lecturing and intimidation out and adding in the provocation of a game.” Cavnar was especially pleased to announce several new tools on the VegOut! website including online tracking of your veg consumption. She also talked about the expansion of collaborators including the Houston Food Bank, which will be supporting teams and participation in all 600 of its Houston area distribution points. The Houston Food Banks is the largest in the nation.

“Who doesn’t like a challenge?” asked Dr. Faith Foreman, Assistant Director of City of Houston Department of Health and Human Serivces. Foreman, who also chairs the Mayor’s GoHealthyHouston task force, spoke about the importance of the VegOut! Challenge in the Mayor’s city-wide efforts to make it easier for Houstonians to live a healthier life. 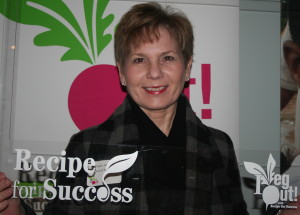 Paula McHam, a Cigna executive, spoke about the capacity for the VegOut! Challenge to serve as an especially effective Worksite Wellness tool. “We started our Cigna Salads in 2013, so this will be our third year of the Challenge. In the meantime our team has grown significantly; we try to inject a lot of fun into it.”

Chisholm Tate of Luby’s Fudruckers, a major sponsor of the VegOut!Challenge 2015, is also leading his company team to participate. Last year’s winners of the largest worksite wellness team, Luby’s sent our invitations to over 900 employees in the Houston area and issued challenges to their colleagues in cites across the nation. 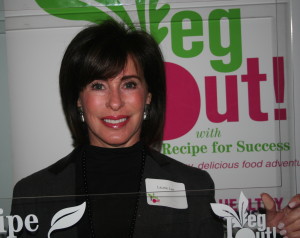 Brian Greene, of the Houston Food Bank was on hand as were representatives of Shape Up Houston and Revolution Foods–all collaborating with Recipe for Success Foundation to expand participation both locally and nationally. Council Member David Robinson stopped by to lend his exuberant support and insistence that “We can’t let San Antonio beat us!”

On hand to learn more about using VegOut! in the workplace were executives from Accenture, CocaCola, Linn Energy, MLC Ventures, Pariveda, Riviana Foods, TAM International, the Texas Medical Center and United Healthcare, among others. From the sound of things, there are several inter-agency challenges bubbling up, including between the Hosuton offices of Accenture and PriceWaterhouseCoopers.