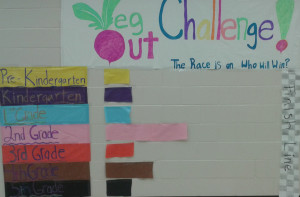 VegOut! 2015 has engaged schools across the Houston area and beyond. We love the creativity and enthusiasm that our Seed-to-Plate Nutrition Education™ instructors, other teachers, principals and volunteers are channeling into this year’s VegOut! Challenge. Here’s a taste of the VegOut! fun blooming at Heritage Rose Elementary in Fort Bend ISD.

Viviana Ayala, the school’s Seed-to-Plate Nutrition Education™ instructor, collaborated with Principal Shequelle Foster-Gims to open up the VegOut! Challenge the entire school. Ayala also created a clever, competition-inducing poster and placed it prominently in the cafeteria. “The poster reads: ‘Veg Out! Challenge! / The race is on … who will win?’,” says Ayala. “Below this is a graph on the left side with the grades from pre-k to 5th grade. As the percentage of kids per grade complete the 7-veggie mark each week that grade will get closer to the finish line. In essence it’s a race competition, which gives everyone a visual motivation to try more veggies.”

Both Principal Gims and Assistant Principal Nancy Sanchez offered their praise of Ayala’s motivational poster saying: “We love your idea of the VegOut! graph Competition.”

The dynamic Ayala currently teaches approximately 92 second graders in rotating groups during school each Wednesday, as well as educating teachers and parents after school on Wednesdays on healthy cooking/eating. “There are a total of 5 groups of second graders,” says Ayala. “I teach three different groups on the first and third Wednesdays of the month; on the second and fourth Wednesdays, I teach the other two different groups in Spanish/ESL. I also teach the parents/teachers every Wednesday from 4-5 pm. I have both Spanish and English-speaking adults, therefore I teach bilingual cooking classes.

During one of the first weeks of the VegOut! Challenge Ayala featured the popular 1-2-3 Salad. “I like to call it the super awesome salad,” says Ayala. “We incorporated Swiss chard, green lettuce from our garden and spinach as the base for our salad. We then added snow peas, carrots, fresh strawberries and a few dried cranberries. In addition, we mixed some awesome nutritious quinoa and sprinkled some sliced almonds and feta cheese. Lastly, we mixed in some balsamic dressing for a pop of flavor.”

The salad was a hit with even the most skeptical students. “Some of them were hesitant, but once they tried it they wanted seconds,” says Ayala. “Another popular recipe was our Sunshine smoothie, which included blueberries and kale.” 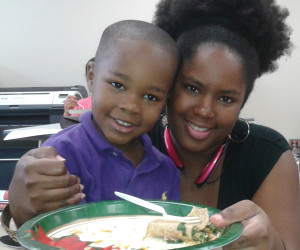 Ayala says she’s received lots of great feedback from students and adults. One teacher remarked to Ayala, “the VegOut! Challenge is an awesome way to challenge me to try different veggies.” And she heard one student exclaim: “We are doing a salad?! That means we can add it to our veggie log!”

One parent asked, “Can we do a recipe next class where we add lots of veggies?” The same parent commented, “I loved the Green Garden Frittatas and my kids did, too! I am able to sneak in vegetables into the meals without them knowing.”

Nice work Ms. Ayala and everyone at Heritage Rose Elementary! A quick prize reminder for teachers and principals: be sure to check out our great prizes just for you! Principals with the largest Campus Veg Out! Team will win the relaxing A+ Principal spa/beauty package, and the first 60 Texas teachers who turn in their Veggie Tracking Logs will receive a Snap Kitchen gift card! SEE OUR PRIZES PAGE FOR DETAILS!