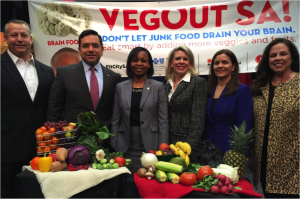 San Antonio Mayor Ivy Taylor launched her year long VegOutSA campaign with a call to action to take the VegOut! Challenge in March during her morning proclamation at San Antonio City Hall on Tuesday, February 24. Mayor Ivy Taylor, joined by members of the Mayors Fitness Council, challenged the city’s businesses to VegOut! in the workplace and support their employees efforts to complete the 30 Ways in 30 Days Challenge this March. 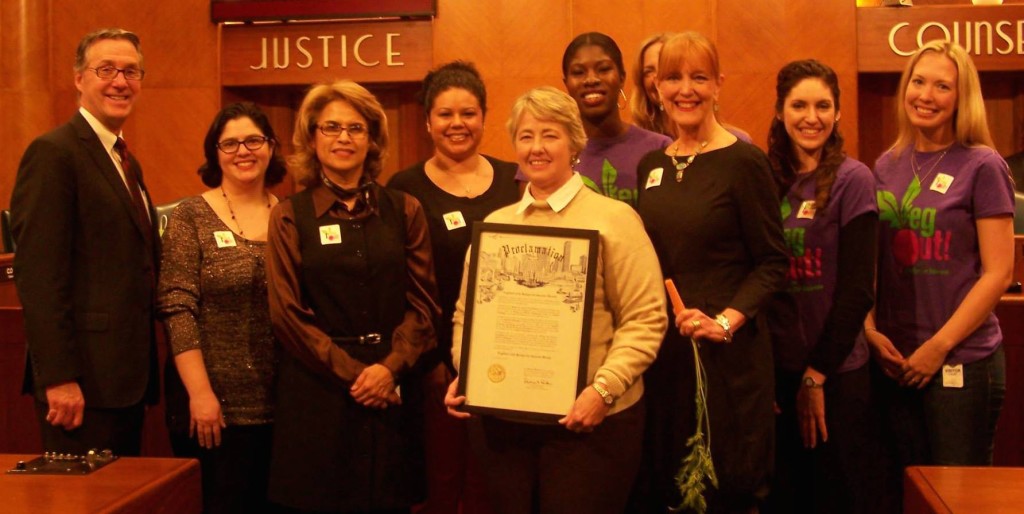 Not to be outdone, Mayor Annise Parker and the Houston City Council Members, led by Council Member Stephen Costello, declared March Official VegOut! Month in Houston. Costello and Parker both commented on the work of Recipe for Success Foundation to reverse the trend of childhood obesity, especially impressed by the group’s Seed-to-Plate Nutrition Education programs across the country, but most notably in Houston. The Mayor cajoled council members to abandon their unhealthy ways and offered up her own advice on how to prepare yard beans, okra and other produce she traditionally grows in her own home garden. The Mayor has completed the challenge with ease in both 2012 and 2013. Recipe for Success Founder, Gracie Cavnar stated that VegOut! was a fun, engaging way to get the entire community talking about and eating in a healthier way. Cavnar challenged every member of Council to be leaders in the effort and complete the challenge in 2015, indicating the pressure was on to perform better than San Antonio. Council Member Jack Christie, a medical doctor, declared that a diet of predominantly vegetables was a proven path to better health and Council Member David Robinson insisted that he could not allow San Antonio to rouse more residents than Houston to participate in 2015. The REcipe for Success team provided carrots to each council member to get things started, and delivered trays of fresh crudités provided by sponsor, HEB to all the council offices.