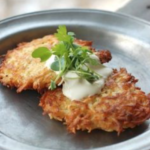 Veggies Featured in this Recipe