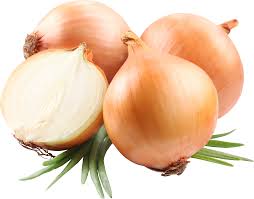 Onions are cultivated and used around the world. As a food item they are usually served cooked, as a vegetable or part of a prepared savoury dish, but can also be eaten raw or used to make pickles or chutneys. They are pungent when chopped and contain certain chemical substances which irritate the eyes.

Bulbs from the onion family are thought to have been used as a food source for millennia. In Bronze Age settlements, traces of onion remains were found alongside date stones and fig remains that date back to 5000 BC. In ancient Greece, athletes ate large quantities of onion because it was believed to lighten the balance of the blood. Roman gladiators were rubbed down with onions to firm up their muscles. In the Middle Ages, onions were such an important food that people would pay their rent with onions, and even give them as gifts. Doctors were known to prescribe onions to facilitate bowel movements and erections, and to relieve headaches, coughs, snakebite and hair loss.

Have you eaten onions this month?