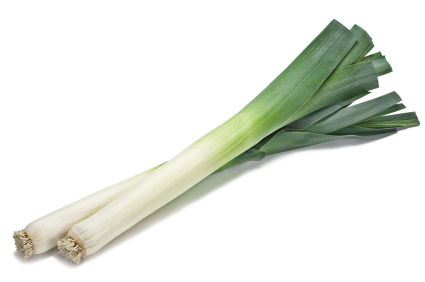 Leeks have a mild onion-like taste. In its raw state, the vegetable is crunchy and firm. The edible portions of the leek are the white base of the leaves (above the roots and stem base), the light green parts, and to a lesser extent the dark green parts of the leaves. One of the most popular uses is for adding flavor to stock. The dark green portion is usually discarded because it has a tough texture, but it can be sauteed or added to stock. A few leaves are sometimes tied with twine and other herbs to form a bouquet garni.

The leek is one of the national emblems of Wales, worn along with the daffodil (in Welsh, the daffodil is known as “Peter’s leek,” Cenhinen Bedr) on St. David’s Day. According to one legend, King Cadwaladr of Gwynedd ordered his soldiers to identify themselves by wearing the vegetable on their helmets in an ancient battle against the Saxons that took place in a leek field.

Have you eaten leeks this month?

Are you ready to take the VegOut! Challenge with us this year? IT’S AS EASY AS 1-2-3
REGISTER Visit https://t.co/Uis2SWSZtQ
EAT Try and track 30 different vegetables in March to earn points & badges.
SHARE Join in the conversation with #vegoutrfs and #vegout2021